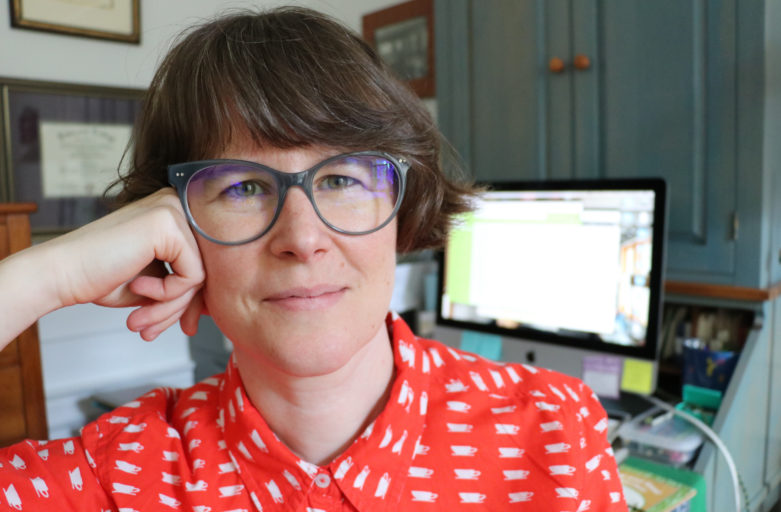 What can you tell us about the stories behind Unknown? What inspired you to write the play?

In 2010, I started coming to the Lesbian Herstory Archives in Brooklyn, NY, to attend events and occasionally volunteer. I was there not only looking for histories I couldn’t find elsewhere, but also to meet other lesbians.

One day, while volunteering at a time when special collections (collections of people’s personal papers) were being processed, I remember going through a few boxes of materials from one woman in particular. The boxes contained diaries and writing and audio recordings from throughout her life. As someone who has kept journals my whole life, and knew the intense feeling of violation that comes from someone else reading them without permission, it felt particularly powerful that someone would choose to let others into their diaries – all those deeply felt emotions, the banalities, the confusions, the excitement, the loneliness – all of it. Why would someone do that? Was she still alive? What did she hope others would find there?

Of course, I tried Googling her, but she was clearly of a generation that lived most of her life before the internet, and she wasn’t a famous person who would garner lots of web links late in life.

As a writer, as someone who was actively seeking stories of other queer women, it was an incredibly rich encounter. That was the seed from which the play grew – that moment of encountering another person’s life through their most intimate thoughts.

I should add, however, that no facts from that person’s life were included in the play, and all of the characters in the play are completely fictional, they are not based on anyone in particular at the Archives or elsewhere. The situation itself was the catalyst, rather than specific details.

We’re so excited for Unknown’s world premiere! Tell us more about your background as an artist and a playwright. What kinds of stories inspire you to tell them?

I loved reading, telling, and writing stories from an early age. Like a number of other writers, I was a bit of a loner as a child. My family moved around a lot and I changed schools often, so stories and writing were a form of companionship, a way to explore, an attempt to understand or come to terms with things that didn’t make any sense. And they were also just fun.

But the thing that has really stuck with me over the years is the desire to make sense of a world that rarely makes sense, to understand why we do the things we do. In particular, I’ve always been interested in questions of how the things we believe (true, false, or something in between) shape our actions. We create worldviews, we learn them, we wrestle with them, and they impact so much of our lives. Beliefs about how and why we are or not loved or accepted. Beliefs about what success looks like. Beliefs about our value in the world. Beliefs that differ dramatically from the people who might be sitting right next to us, people who might be taking the same action, but for wholly different reasons. That’s usually part of the spark that gets me going on a new project.

Unknown is a story that addresses social complexities as much as personal relationships. What social issues are important to you and how do they inform the art you create?

The truth is that there’s not a single issue or single set of issues that I have always focused on in a singular way in my politics or art. I started getting politically active as an undergrad primarily in anti-war organizing following 9/11, and also a bit around labor rights, but that wasn’t necessarily apparent in my creative writing at the time. And I would say that’s true today as well. The particular issues I end up engaged in activism around don’t always directly link to my art-making. In my writing and creative work at this moment, I’m really interested in the idea of community. “Community” is a word we use a lot in the US, but the things we’re signaling with that word don’t really link up with the experience of being in community with people, of the messy realities of being accountable, of encountering conflict and challenge. I’m really interested in that disconnect, and I see it a lot in the political spaces I participate in.

Creatively, are there artists, playwrights or performances that have influenced you?

I’m restless and disloyal when it comes to influences. I’m always willing and ready to discard one in favor of something that’s new to me. I feel like there’s so much I didn’t read and learn as a young person, even though I feel like I had some great teachers (my parents as much as the adults I encountered at school), and I was a voracious reader and inhaled every cultural experience I could. I feel like I can never be exposed to enough, I always want more stories, more histories, more perspectives and arguments that I haven’t yet heard. Because the reality is that I was educated in a history and a literary and artistic canon that taught me that if I wanted to be taken seriously as a thinker or an artist I needed to emulate or aspire to be like the white men who were at the center of those histories and canons, and who were most of the ones telling me how to interpret those legacies, leaving so much of the world out. I grow more skeptical of what I was taught and the influences that got me here with every passing day.

Do you have any other projects coming up you’d be excited to share with us?

This play, which I wrote a bit over 7 years ago, ended up pushing me off on a journey that took me around the country, visiting spaces that are primarily run by or center the experiences of LGBTQ women. And that journey became a feature-length documentary film, my first film, titled All We’ve Got, which will have its world premiere in New York City at NewFest, one week after Unknown receives its world premiere. It’s a remarkable coming together of two projects that are, for me, deeply connected, and wrapped up in similar questions about how we find connections with other people, why we need those connections, and the ways our encounters with community are not always what we thought they might be.

When you’re not writing or creating documentary films, how do you spend your time? What are some of your hobbies or passions in life?

A few years back, I became a birder. Thanks to my parents, hiking and camping were always a big part of my life, but being in a big city now, it isn’t so easy to access. Birding has become a really enjoyable way for me to stay connected to a sense of wildness and the rhythms of the natural world. It also offers an incredibly intimate and direct understanding of the consequences of human influence on the environment, for good and ill. Not to mention it is its own subculture full of interesting twists and turns, which makes the people watching sometimes as interesting as the bird watching!

Catch the world premiere of Unknown October 18-27 at The Crane Theater in Minneapolis. Check out Alexis’ website.