Çicada L’Amour of the House of Larva Drag Co-operative 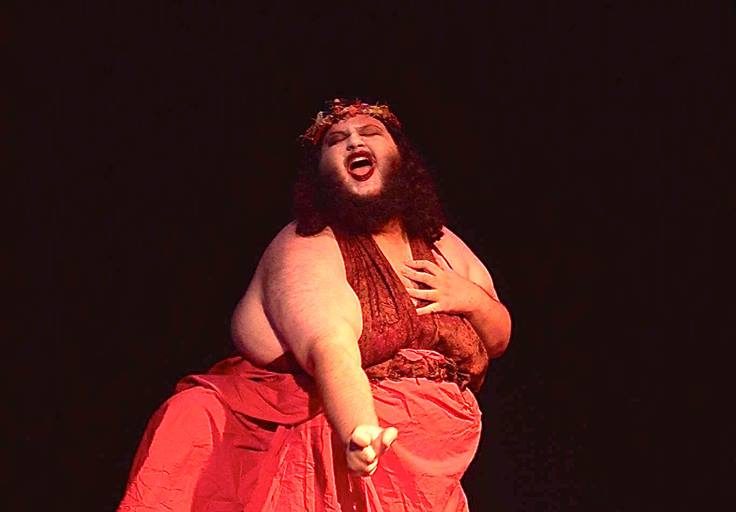 We interviewed Çicada L’Amour (Max Brumberg-Kraus) of the House of Larva Drag Co-op about their art, inspirations and passions. Çicada L’Amour and Pouchet Pouchet will be performing on Friday, February 15 @ 7:30pm for Controlled Burn: Queer Performance for a World on Fire.

For our readers, how are you involved in Controlled Burn?

I am performing with my drag group the House of Larva Drag Co-operative, specifically with my friend and artistic partner Pouchet Pouchet (McKay Bram).

Let’s jump right in – what motivates your work as an artist?

It really depends.  I definitely do most of my art as Max, not as Çicada, but then my out-of-drag and in-drag personas are not always so easily distinguishable. I would say a lot of my art centers around questions of sexuality and gender in the body.

Privilege (racial, sexual, gendered, ability, etc.) allows us to ignore our materiality. For instance, based on all these…lovely…Greek philosophical ideals, there’s the soul/psyche/energy and [then] there’s matter. Matter is feminine and it’s shaped by the masculine soul. This paradigm was also reflected in the ways Greeks discussed non-Greeks, although they did not have the racial categories we have. Now, if what is truly human is the soul and not the body, then exploitation of bodies is not inherently exploitation or violence or violation—that’s the danger! Christianity jumped on this dualism and spread this ideology. It carried on through the Enlightenment, with reason being another attribute of the masculine, of the white, of the European, of the male, of the Christian (or at least culturally Christian). Even [the field of] human biology began as a way to argue that the anatomies of women, of black people, of sexual inverts prove their inferiority.

When you’re the dominant whatever, you can ignore the aspects of yourself that are aligned with dominance, ignore the flesh. You can operate as always a subject with the “other” always as object. For me, as a fat Jewish fag, there are ways that I can and cannot operate in certain spaces. There are behaviors, glances, and spatial awarenesses that someone who doesn’t have these identities can ignore. Street harassment or gendered bathrooms or the majority of clothing are constant reminders—through exclusion—of my body and that my body is culturally “wrong.”

Sometimes I am motivated to challenge that “wrongness.” Out of drag, my plays, poetry, and scholarship examine queer community through time, through history, through memory/trauma, through myth, through religion, and through vision/ecstasy. There’s a generativity to that work, [to] positive claims about queer community. But as Çicada L’Amour, that’s not really what I’m trying to do. As Çicada, instead of arguing for the humanity of queer people, I embody and invite (sometimes a little aggressively) the audience into physical discomfort, into feeling the aspects of their own bodies—and I do it with myself too! House of Larva uses drag as a celebration (and mourning) of physical alienation under the heteropatriarchal, white supremacist, capitalist empire that is our society and even (we hypothesize) our cosmos. I question that as beings who are constructed—socially or otherwise—that ANY of us are subjects rather than objects. I am motivated to show how subjecthood can be an ideological weapon [that] patriarchy uses to make some feel more human than others and thus exploit them.

What is the piece you’re performing for Controlled Burn specifically about?

Our piece is based on Brett Kavanaugh’s hearing and #metoo. In particular we are responding to the claim at the hearing that women and others speaking up against men is a witch hunt. Our act plays with that, supposing, what if it was a witch hunt?! I don’t want to give too much away, though. We hope it will be funny, but it’s also dark. You know, what’s that line between hilarity and deep pessimism? 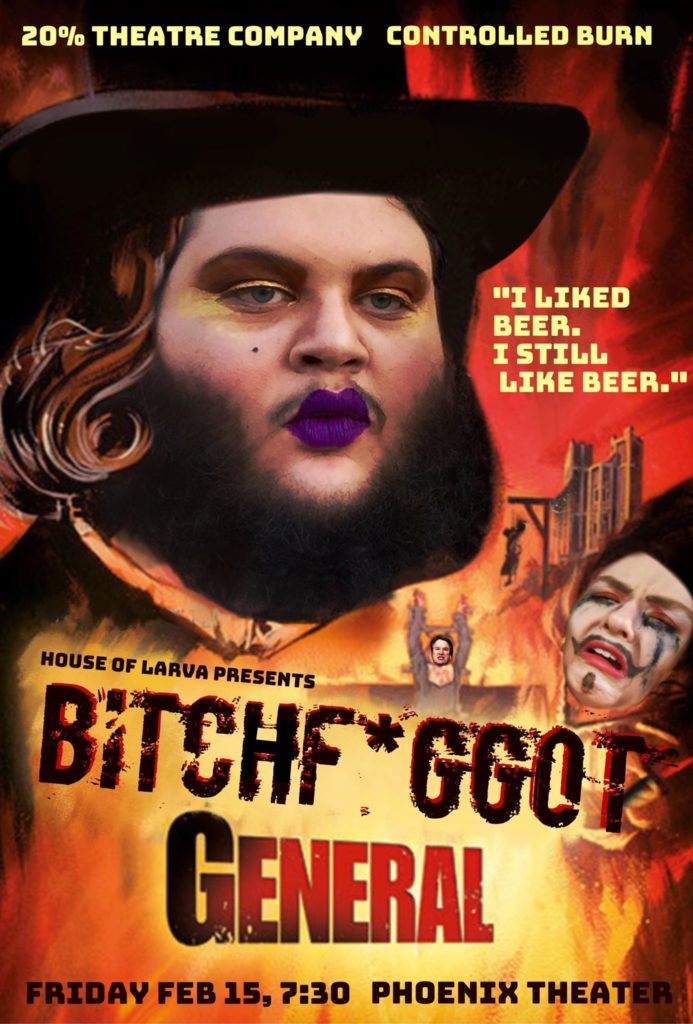 That sounds super interesting and relevant! Can you talk a little bit about your background as an artist? What sort of artistic experience are you bringing to Controlled Burn?

In the Twin Cities, I’ve mostly performed in drag as Çicada, a lot with Patrick’s Cabaret, but also at Pangea and even at universities. Last spring House of Larva got a really awesome gig teaching workshops and putting on a full-length show at Wheaton College in Massachusetts. But my greatest passion is out of drag. I love writing, and I love directing. I’ve been able to write and perform poetry in the Twin Cities and Rochester, MN. I directed about five shows in college (and two in high school), but recently I’ve only been able to do more directing stuff through workshops. By the way, House of Larva offers a drag workshop, “Genderbending Starts at the Skin.” Book us!

Awesome! I hope folx will. So, what other projects are you working on right now?

So when I’m not performing, I study at United Theological Seminary of the Twin Cities, which just moved to St. Paul right by University and 280.  With my dear chaplain-in-training friend, whose background is in clinical social work, I’m developing a program called “Drashing the Body,” which combines movement, somatics, midrash, devising, and critical pedagogy to explore trauma in the Bible. There’s also a healing aspect as well, [this idea] that engaging pain in the Bible can be a resource for engaging our own pain. These workshops will be open to the public and I’d love to see some familiar faces from the performance/art world come through!

Besides that, I’m always writing.  I’ve got two plays I’m working on and I can’t wait to be able to workshop them!

You are working with a lot of ideas in so many different ways. Which artists have inspired you over the years?

There’s a deep influence of Antonin Artaud’s dramaturgy in House of Larva. The ritualistic, carnivalesque, and violent nature of his charge to theatre is as potent today as it was a hundred years ago. I tend to look toward the sixties and seventies a lot: very influenced by John Waters, by Divine, by Jayne County, by Jackie Curtis. For theatre, I am so inspired by the work of Reza Abdoh in the 1980s and 90s, the radical combination of Americana, of kitsch, of Sufism, of the queer, that indulgence in cacophony and spectacle! Movies too! I love folk horror (there’s a folk horror theme in this show), and old sci-fi, film noir, and I have a soft spot for Peter Greenaway’s long, dry, visually stunning, often quite cruel movies. I love ‘em!

So, it sounds generally like you are very busy! But when you do have a bit of extra time, how do you spend it?

I love cooking, especially soup. And I love hosting. Basically, what I’m saying is: let me feed you! But also I really love going to the movies, playing with makeup, and talking about religion, sex, and politics at the table. I’ve been really into that show 100% Hotter on Netflix. It’s peak trash and I love it.

Ok, last one – describe your pre-performance ritual if you have one.

Usually entails taking a shot, blasting Patti Smith’s “Because the Night” or Jayne County’s “Toilet Love” and singing along. That’s all. I’m a simple creature.

Find Çicada L’Amour and the House of Larva Drag Cooperative at house-of-larva.com and on Facebook and Instagram.