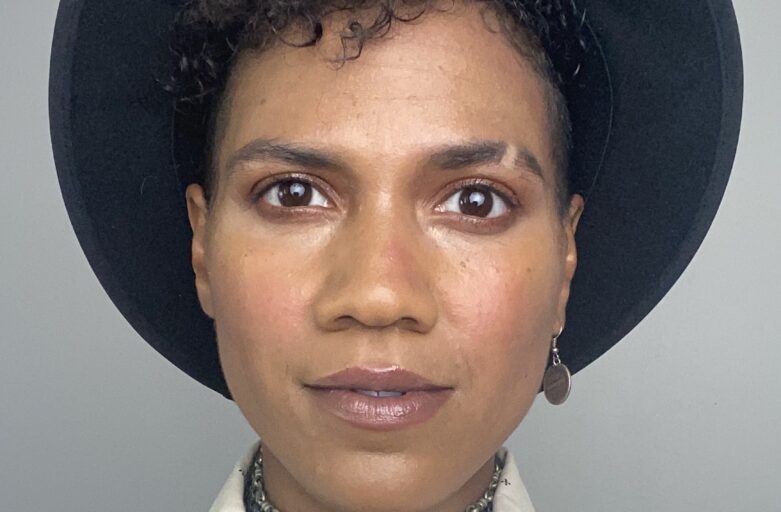 What can you tell us about the work you're presenting as part of Q-STAGE? Who or what asks this work of you?

Mx 4 Minneapolis is a love letter to Black queer trans people for existing and expressing themselves and a work of gratitude. It is a rebellion against dire circumstances cis people have put us in over the course of the emergencies of COVD-19 and Uprising and others they’ve caused in our lives. It’s a thank you especially to Marsha P. Johnson and I hope the continuation and escalation of whatever part of her soul initiated the movement of throwing the first brick. It’s Black trans Torah-Talmud commentary. It is my pure agony laid bare that I have no temple to keep and my attempt to bring the temple everywhere I step. It is the third option.

My pieces are never without their ritual and magic, so as Mx petitions for ancestral protection, so did I with this piece. This work asked me to leave my heart open enough to bring it through, to adapt with generosity and softness toward myself, and to let go of my limited understanding of who I am as a Black trans soul, person, creator, and leader.

For a long time the performing arts have been not just havens for young Queers but also an opportunity for expression and community, and for many a pathway towards identity. Any encouraging words to a Queer kid who's struggling with the limitations present in performance today?

The mother of a gifted child I know was telling me about how her daughter knew what sewing was around 3 and got frustrated when her fingers couldn’t do it. Cognitively, she was intelligent enough to break down the process and her hands just weren’t ready. Her body wasn’t ready. She cried about it and I cried hearing about it. I understood the child’s frustration because I’ve been there. It really be like that sometimes when you find your identity as a youth through performance. I’ve been on stage since I was eight. There was stuff I wanted to do, beauty I wanted to craft, and sometimes that just doesn’t happen. But unlike this blessed baby, no one ever took the project from my hands and told me that it was fine to be where I was at. I’m telling you that it’s fine to be where you’re at. It’s also fine to keep picking up the projects you aren’t ready for until you are. The following offerings might make it easier.

Forming an identity with yourself outside of performance is important. Having meaningful relationships with other artists that don’t revolve around work is important. Taking care of your mental health is the most important. Learning about co-creating healthy boundaries and practicing staying in line with them is important. Performance rarely gives you the justice you can give yourself by even just breathing deeper or drinking one more cup of water. Or by saying no to a project that might bring you more money because it just doesn’t feel right. I’ve left performing intermittently to work on everything I’m telling you about. I burned out or hurt people when I didn’t. I’m a better artist and more respected for it because I stopped and took the time. Then when you do perform, it’s much easier to do that complex work of being because you’ve rested other parts of your life that hold it up. That’s star behavior.

What's something you've learned about making art in the last few years that you think helped you become more in tune with your vision?

There’s a false urgency cishet white supremacy puts on art because it’s turned a spiritual experience into a product. I cut my teeth in New York City, so I was used to a higher pace and higher demands when it came to art making. I was brought up in a very “show must go on” environment. But I’ve learned how deeply important it is to decolonize the work by just taking time. This production was wild, as productions that encounter ritual magic in process are wont to be. It changed shape a million times, critical set pieces broke, I ended up with glass in my feet at one point. It’s a pandemic, we’re still in uprising, and I’ve also been going through a lot of hard personal life changes. What ended up making this piece happen wasn’t driving it and pushing through every moment, but knowing when to push and when to stop. When to say “You know what, Shabbes got me on a film night and that’s ok.” And truly, it bears repeating that investing in myself outside of the performance space always shows ten times its worth coming back into it.

Who are some Queer Artists (local or otherwise) you want to shout out? Who should we be paying attention to?

Literally I’d be fucked without my Q-Stage predecessors. I would feel some type of way if I didn’t say thank you publicly to Andrea Jenkins as she set a path for me into my first Walker gig and into City Hall. Shout out to Taylor Seaberg, who I met way back before I knew what was even happening with gender let alone my art. Basil Kreimendahl too because he taught a playwriting class where some of my channeling style emerged in longer form. C. Michael Menge doing Naked Stages, b always got my back. Big love to Mason Olay-Smith, my Black trans Torah club fam who just dropped a book, Crossbones on My LIfe.

Locally, please be checking for any of the artists awarded by the Black Trans and Native Two Spirit Fund.

Any plans for the work beyond Q-STAGE? What is next for you?