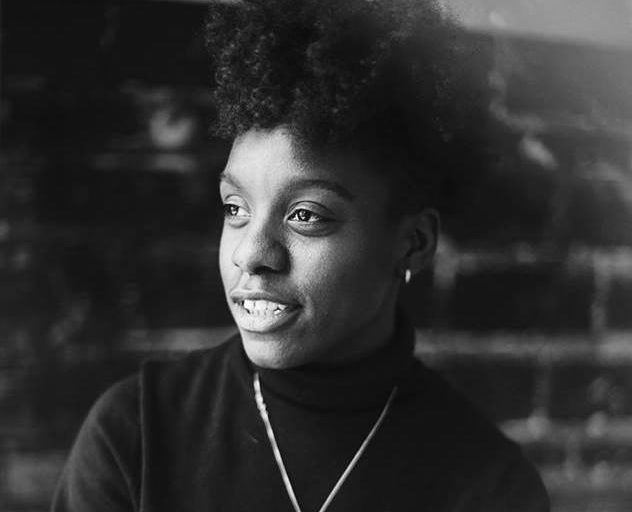 Q-STAGE 2019 artist Taylor Seaberg on growing up as a military dependent and transracial adoptee, and on being free as a black and queer individual.

Where did the ideas for the play you’ve been developing through Q-STAGE come from?

The idea for Weirdo_Indigo Child​ came from autobiographical themes of my growing-up experience. I was a military dependent and a transracial adoptee born out of the country in Kusel, Germany, but one who still has a relationship with their biological mother. There was always this shrouded history behind our family heritage because I was adopted, my mother was adopted, as well as my grandmother. I used to say growing up without our fathers was a family heirloom, an unfortunate tradition passed on of ambiguous loss, a loss of land and family. My mother was adopted by a Black American man around the age of five. After interviewing my mother, Jovone, Ngiri is the proposed last name of her original community in Kenya. I was taught that he was from the Kikuyu tribe, one of the largest ethnic tribes in Kenya that resides in Mount Kenya. My grandfather was a biochemist in Nairobi who met my grandmother on a missionary trip almost forty years ago. There is currently extensive gay rights activism happening in the Kenyan High Court to decriminalize homosexuality and up until 2011/2012 the military also had “​Don’t Ask Don’t Tell” in place, which meant you could be dishonorably discharged for being outed as gay or expressing publicly queer. I didn’t grow up with a close proximity to my Kenyan heritage, but I also feel a strong personal calling to further the relationship to this family ancestry as the stems of our ancestral roots very much guide us and shape us.

Why is it important to you to share these stories with the community?

I enjoy sharing stories that I was ashamed of as a child but reclaimed later in life. In the 90s/2000s I was very ashamed of how seemingly unconventional my family was at the time. I like art that speaks to the voice that a younger version of myself needed to hear. As a child, I grew up in a very racially mixed family with individuals who were Scandinavian and Kenyan, but my family wasn’t as adept at discussing the implications of race to me and my brothers, especially because we grew up experiencing our blackness vastly different living in Europe versus in America.

One of the first military bases I actively remembered living on was Langley Air Force Base in Norfolk, Virginia. This was in 1999, I was six, and my parents were divorced. In elementary school, I was asking the bus driver to drop me off a couple blocks down from my house so neither the white nor black kids would make fun of my adoptive Dad. This area of Virginia (close to Virginia Beach) was very racially segregated and there were gang wars against other communities of color. I was more attuned to my blackness and the political realities of my black identity in this neighborhood.

At the age of sixteen I was going to a military academy in Aviano Friuli Venezia, Italy and was obsessed with Jada Pinkett Smith performing heavy metal music in the band ​Wicked Wisdom​.

Frontwomen who were the driving force in punk/metal groups in the early 2000s such as​ Flyleaf​, ​Paramore​ and ​Lacuna Coil​ became my main iconography. As with many adolescents, I was into the grunge and emotive emo soundscapes that haunted our upbringing and laid bare the slow aches of pain and trauma over guttural vocals and quick-stepped guitar progressions. My older brother was a huge influence because I grew up watching him play in his punk rock bands.

I was made fun of a lot for many of my natural tastes growing up, but my brothers and I were also so unapologetic and mysterious about our art forms that people always flocked to us playing in the hallways during lunch breaks, a single guitar amp and a quarter inch cable echoing our tunes through the walkways to the cafeteria. It wasn’t until the rise of social media in 2007 and the hyper-exposure of other “alternative” black folx that I was aware there were other black kids “like me” who enjoyed rock, heavy metal, and punk music along with rap and hip hop.

Clearly this work is intensely personal, but what are the major themes of the play generally?

Being free as a black and queer individual. Redefining what it means to be black and how constricting it is to feel a need to fit into specific boxes of black identity. Most often times in white spaces you can’t be unapologetically black and in black spaces you can’t be unapologetically queer. Internalized racism was a big thing in my family, there being social ostracization from Black Americans, Kenyan family, and white family alike for being different and internalized racism influencing that. Additionally, when my Mom tried to visit Kenya as a teenager she was ostracized by the African family for not being “African” enough and more assimilated in American culture. The play is as much about my life as it is about my mother’s. My upbringing might be an unfamiliar experience to people and I want there to be a visual embodiment of what me and my family have been through. Often times there’s nothing more real than watching someone go through an awkward coming-of-age story.

Tell us about the other artists you’ve been working with to create Weirdo_Indigo Child. Who are they?

I have been having a great collaborative experience with the actors playing the main characters, Salecia Barry (playing Evy Ngiri) and Nia Madison (playing Cicada Otieno) in rehearsals twice a week at The Guthrie. The natural chemistry between these actors is something that is wholly inspiring in a way that gives me life, [and speaks to] the relationship of black femininity while simultaneously challenging gender narratives. As the characters are growing into queerness, so too do I see the actors traveling through this landscape in their personal lives. Kevin Gotch (Philip) and Lisa Brimmer (Lenora) were great to incorporate in the voice recording process. Antoine Martinneau and Kahlil Brewington (of the Afro-futuristic band Moors Blackmon)​ will be part of the live band performing throughout the play. And my partner, Rosey Lowe, is the show’s stage manager, having a wealth of experience in the world of performance theater, stage combat and stage blocking/direction. It’s great to work with someone who knows my crazy mind and artistic process and who is always encouraging me even through self-doubt.

Tell us a little more about your background as an artist. What sort of artistic experience are you bringing to Q-STAGE?

So I’ve never ever been a playwright, but I’ve always been a writer, particularly of short stories and spoken word. I grew up in a very musical family and my mother was a choral director in a Lutheran church who sang and played piano. If you didn’t play an instrument you were sort of the black sheep (​haha​) in my family. My mother was the same way about music that she was about religion. We didn’t have to believe in the same faith as her, but we needed to believe in something. When I said I no longer wanted to sit in on the Lutheran church services but play bass in the Gospel church service my mother said, “As long as you go to church, I don’t have a problem with what you do.” When I said I wanted to quit playing flute my mother side-eyed me and retorted, “​Well…you don’t have to play flute but you better play something.”​ That same year I enrolled in an introductory guitar class at my high school.

Around freshman year of high school was when my Drama and Literature teacher asked if I wanted to run lighting for the community theater plays for extra credit. My Mom also featured in many of these community theater plays and I accompanied her. I shrugged my shoulders and said yes but ended up developing a passion for the theater world molded by my mother – I was just too shy to perform.

Generally, what social issues are important to you and how do they inform the art you create?

Social issues that pertain to POC trans and gender non-binary identities are my focus. It’s amazing how overlooked and despised we are and yet how integral we are in many forms of culture. Introduced by Britain during colonial rule and incorporated into Kenyan law after the country gained independence in 1963, the penal code punishes acts “against the order of nature”—usually interpreted as sex between men—with up to fourteen years in prison. I’m always looking up to the work of Karĩ W. Mugo, a Kenyan writer who resided in Minnesota for a time as a freelance author and currently works with the Mawazo Institute, Women Leading Research in Africa. They create opportunities and platforms for the participation and leadership of women in STEM and the dissemination of transformative research and ideas from African researchers and thought leaders. Through Karĩ’s posts I am also being updated on the ruling of homosexuality in the Kenyan High Court. She often talks about the National Gay & Lesbian Human Rights Commission, one of the gay rights groups litigating the case.

Which artists or performances have inspired your artistic practice over the years?

I’m really grateful to be sharing a weekend with Dua Saleh because they have inspired me heavily as an artist. It’s great to see a Sudanese hip hop artist who defies boundaries being seen and recognized on a global scale. I also love genre-bending artists like Grace Jones, Prince, black punk rock groups and black psychedelica like ​Bad Brains​, ​Fishbone and Funkadelic. I’m inspired by local artists like Eric Mayson (who is also a genre-bending multi-instrumentalist) and Drea Reynolds (who is a genre-bending electronic loop artist).

Do you have any other projects in the works that you’d like to tell us about?

Currently, I’m the lead guitarist, pianist, and singer-songwriter in a black psychedelic group called ​Black Velvet Punks along with Traiveon Dunlap (drums and vocals) and Roderick Glasper (bass). I want to begin learning Swahili more intensively and incorporating my Kenyan heritage into my work, which I’m hoping to learn from my friend, Fanaka Ndege. I used to perform with my older brother, Donovan Seaberg, who is a phenomenal guitarist for the local band, ​Ghostmouth​, and I want to return to this collaborative relationship making music with family.

When you’re not deep in Q-STAGE rehearsal and development, how do you spend your time? What are some of your other hobbies and passions?

I enjoy reading books from political authors like Adrienne Marie Brown and bell hooks. I’m just now learning how to use Logic Pro X to record my own beats and mix/master live instrumentation. There is a studio behind my house that the landlord and I are working to fix up. I am studying audio engineering to be a better live sound engineer in general. I legitimately just actively consume new music; I’m a huge fan of the Colors Music Youtube channel and British hip-hop artists Kojey Radical and Little Simz are my longstanding obsessions.

Ok, last question! Describe your pre-performance ritual, if you have one.

I wish I had a better one. My pre-performance ritual to get pumped for a rock concert is usually a shot of tequila with a pineapple back, or a rum and coke, while meticulously strumming a guitar in the back corner to rid myself of chronic nerves. However, I’m all about leaning into the nervousness and using it as additional energy to project on the stage. The biggest pre-performance ritual is honestly meditation, in isolation, encouraging yourself to remember all of the reasons why you put your work before an audience and the impact it has on your own life.