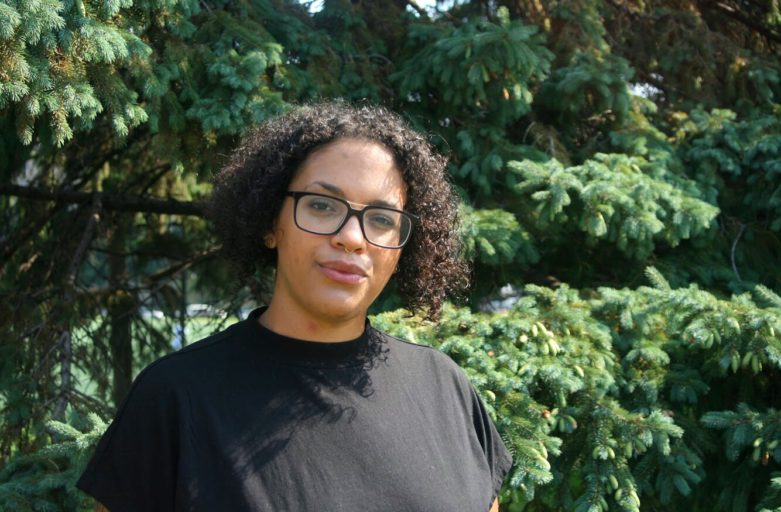 Why did you want to direct Waafrika 123? Why are these stories important to share with the community?

When Claire [Avitabile] first approached me about the project, I couldn’t believe the amount of complexity I was witnessing for a trans* character, for a queer relationship, for a white NGO worker. Lol. Every character in WAAFRIKA 123 is critical on some level: of the patriarchy, of transphobia, of tradition. I think of myself as a bit of an outcast, as a bit of an unplaceable, so I think that helped me connect emotionally to the characters. I’m also an Aries, Capricorn moon, Aquarius rising…so…

But the stories in WAAFRIKA 123 are so important to share with a community right now that needs to see its drama, beauty, and glamour, and terrors represented as real. People like Awino exist, not only in 1992 Kenyan Africa, but also here in the U.S. Maybe this story helps folks understand that the fear of violence against trans* folks, womxn and Black and Indigenous folks is REAL, ya’ll. It’s 2018, get with the program.

What have been the unique challenges and rewards of directing Waafrika 123?

This play has multiple content warnings, including rape, female genital cutting, suicide. Those themes are all layered on top of homophobia, transphobia, and a colonial/post-colonial environment. Working on this play right now has had to be very intentional and include a lot of room for response (emotional and intellectual) to the stuff going on in the world and in the play.

The way Nick [Hadiwka Mwaluko] works with exile and belonging in queer and indigenous communities is by collapsing tribal identities and practices to sort of create a fictional Luo people. It’s an odd move, but one we are kind of mimicking by having an all-Black american cast. Like, for various reasons, and I know some of these reasons, this is the cast that we have. And I think it made us nervous at first, but I feel less nervous about that now, personally. I just think about who this play is written for, and in a lot of ways it is about waking folks up, stirring the pot, not preaching to the choir; although, there is some beauty in there for the choir. There is humor and sweetness and human-ness that I don’t want to be missed.

We have had such amazing community members of Black, African, and Queer fam showing up for me, for the cast, for the community. This is a great reward: looking around at a group of people that think yes, this is challenging, yes, this is a risk, but Awino’s story—a story of trans masculinity, coming of age, young love, and bucking tradition—needs to be told!

Talk about your background as an artist and director. What inspires you to direct plays?

This is my first time directing a full-length play. I’m also growing through a lot of transition right now: I’m an interdisciplinary artist and have been writing and performing my poetry for almost 10 years, and I’ve been involved in theater since I moved to the Cities, but we didn’t have a program at the college I went to. I worked on a collab with SUPERGROUP back in 2012 at Bedlam. Since then I have done a few Late Nite at Mama Laurie’s series working on new work. I had the incredible experience of being mentored by Laurie Carlos for a little bit through a program that doesn’t pay their artists, so I’m trying not to name them.

I had some of the most amazing and ridiculous and demanding directors in high school. Or at least I thought they were. I thought that they were fabulous and still think of some of the things they got away with doing. I’m also an administrator and have managed a ton of projects, so I suppose what inspires me to direct plays is the super collaborative work that happens in theater, the risk of telling a story as a team, the risk of sharing the story you’ve created with the audience. I mean, it is all possibility and all about chemistry. The story that we tell can only really happen once. I think the script jumped out at me because of what Nick was doing with conventions. He was futzing with them and distorting some sort of western gaze on Kenya, and also doing some really (presumably) Kenyan stuff up in there too.

Right now, we are responsible for building a world that makes our lives, thoughts and experiences credible. Some of that will come from voting, some of that will come from considering how we are being a good neighbor (pronouns, bathrooms, housing, healthcare and beyond!) This is shit that queer and migrant communities share a bit in common: lack of knowledgeable healthcare access.

Sure, I care about culture, but I also care about policy. I see art as a major social tool—both igniting conversation, enhancing beauty and the lived experience, and nurturing us in ways that other institutions just cannot.

One thing I’ve found myself saying this week is that WAAFRIKA 123 serves “Dostoevsky realness” in its pursuit of the realities of the human condition. Nationalism, individualism, race and white body supremacy, queer and especially trans safety, are all big concerns. This doesn’t even begin to include the fact of the neo-colonialism that comes with global capitalism or the ways that the effects of global climate change are distributed throughout Planet Earth. This is what I care about in my work. We tell this story on occupied Dakota land (which is also a bit of a shortcut of history, btw). As part of this settler colonial project, I’m trying to reckon, and undo, and release so much. Trying to vision forward by remembering—like, Sankofa. That’s where I am now with it, anyhow.

Have you been involved with 20% Theatre in the past?

I have been supporting and supported by 20% Theatre Company for a few years. In 2016, I joined performance artist and writer AP Looze in thier Q-STAGE production. This year was my first opportunity to direct with The Naked I: Recognize/d, and I worked with Rica de la Concha on her piece Morning Rituals. So much fun!

What artists and/or performances have inspired you over the years?

What kind of question is this? I miss everybody from Patrick’s Cabaret, Bedlam, and Intermedia Arts. Over the years, working with J. Otis Powell‽, and folks at Intermedia (both the artists and the staff) was super informative on how I (try to) carry myself as an artist and an activist. I feel like I’ve been influenced by all collaborators ever. This year I got a chance to work with and explore queer black possibilities with some queer black folks in New York and have been so grateful for friendships that have kept up. My friend Alex and I got our brains turn around in our heads by the Adrian Piper exhibit—her formal fu@kery and meditations on the white imagination’s impacts on the black body in the U.S. was ON TIME for me, even if I was late to it. I love the convos I have with my partner.

Lately, I’ve been really encouraged by Shannon Gibney, Chaun Webster, Simi Kang, Marcela, Rica de la Concha, Keno Evol, Val Deus, Sun Yung Shin, Su Hwang, Paula Cisewski, Camille Gage, and AP Looze. All a dat is in different ways and means throughout the last five years. This is a hard question and one I’m reflecting on major. But like Kahlil Brewington, Dameun Strange, Max Corcoran, Greg Schutte, Park Evans, Andrew Foreman—those boys were all there for me big time and our work together was super fun and co-inspiring too.

Do you have any other projects coming up you’d be excited to share?

I’m really excited for the opening of the Liberation Library in collab with Family Tree Clinic that is happening on November 16 from 4-6pm at Family Tree Clinic in St. Paul. We’ve got some incredible folks reading, a mural to unveil and a library to celebrate. There are local presses donating books, and so much exciting stuff going on! Art is finding new homes! The J. Otis Powell‽ “Interrobang Library” is a collection I had started at Intermedia Arts that closed and I had been lugging those books around since! FTC has been kind enough to make these resources available to folks in their new lobby library.

The other thing I’m excited to share is that I am co-editing this anthology Queer Voices: Poetry, Prose & Pride through MNHS Press with Andrea Jenkins and John Medeiros and it is due out in Spring of 2019!

When you’re not directing, how do you spend your time? What are some of your hobbies or passions in life?

I like to make jewelry, refurbish furniture, and hang out with my dog and cat. I would say writing is a passion of mine, so I hope to be doing more of that when this play is closed!