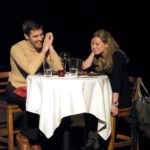 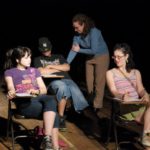 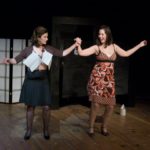 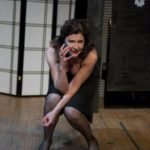 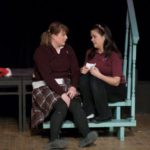 The physical manifestation of Lydia's midlife crisis is submerged in the sink - a $300 wine stained silk blouse. Topless and trapped in a public restroom, she can't embrace her future until she finds cover in the present.

Kids Play shines a brief but beautiful light on the musings of two young sisters playing in the backyard, contemplating adolescence, growing old, and the existence of Santa Claus.

Justin, a transgender man and avid blogger of his own dating misadventures, is caught off-guard by Cynthia, a lesbian bartender who likes him just the way he is...or isn't...

It's hard to describe this play without giving away the creepy twist… Set in a Cuban-fusion restaurant, Perfect Match is a blind-date gone horribly, horribly wrong.

Inspired by the playwright's experiences as a NYC public school teacher, Pedestrian Casualty brings to light some of the issues that are prevalent in urban education. Ms. K, a school teacher in the city, crashes her car and accidentally kills DeShawn – one of her own students, though she doesn't recognize him because he never comes to class.